Eve was invited to be part of Tas Regional Arts Touring Programme 2012. As part of that exhibition Eve was also travelling to regional communities in Tasmania and presenting workshops for local people on how to make a ceramic bird. Eve has visited the communities of Penguin, Woodbridge, Flinders Island and Latrobe.

Seeing Eve’s collection of Oyster Catchers, Little Penguins and Sea Gulls will be an inspiration for some to make their own birds. At the Penguin Festival Eve Howard enjoyed “teaching a lovely bunch of locals some of the finer points in the art of hand building a bird out of clay. Much fun was had, and flock of wonderful creatures was created.” She then took them to her kiln to be fired, “and hopefully not too far down the track they can be shown as a group,” she said. “I’m really happy this is happening. It’s a lovely thing to share.” The clay Eve uses is, she says, “a lovely hand building clay. It’s perfect for a workshop, has lots of ‘grog’ in it, which helps it to support itself. It’s the first clay I ever used, and it’s still my favourite.” (Grog-for ceramic artists-consists of fine particles of dried clay that helps reduce shrinkage and stop cracks forming during the firing process.) Bird builders at her workshop will be using a ‘slabbing’ and coiling process, rolling out flat sheets of clay to be assembled into shapes that can be coloured with ‘slips’ (pigments) or underglazes.

'Eve Howard’s pieces are said to “combine rustic simplicity with a contemporary aesthetic”, and to resonate with sincerity, warmth and a delightful simplicity of line and form.” ... take part in the workshop. It’s one for the birds-and all lovers of birds and art.'

First Workshop for the season 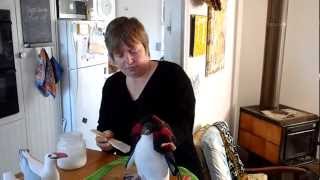